Back to all posts

Nitanee's Nashville Nights was thrilled to present superstar songwriter Gary Nicholson in Concert on August 11, 2018!! Gary performed "Healing", a song that he co-wrote with Nitanee Paris last year in Nashville. It was an enchanting evening under the stars in the canyons of Malibu. 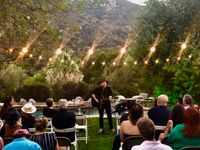